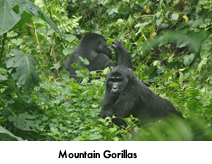 The park is known for its exceptional (bio)diversity, containing more bird, mammal and reptile species than any protected area on the African continent. Although mountain gorillas are now extremely rare and listed as one of the most critically endangered species, successful conservation work has helped to secure the remaining populations.

Accommodation and meals: See Hotels in Goma and Rumangabo.

spectacular eruption at Africa's most active volcano. Mount Nyamulagira, also in Virunga National Park, has been spewing out 200 m high fountains of bright red lava since the beginning of November. It is its biggest eruption in a century. Rivers of lava are flowing north into an uninhabited part of the park, but pose no danger to its critically-endangered mountain gorillas, a statement from the park said.

Rangers have set up a camp in a safe area close to the volcano, where visitors can spend the night.

The eruption could last for several days, or even months. An eruption of nearby Mount Nyiragongo in 2002 destroyed most of Goma city and forced 350,000 residents to flee. Volcanologists have so far said the current eruption does not pose any threat to the local population.

See the video of the eruption.